In my first post about abortion, I detailed how a woman's right to a safe abortion came about in Canada through Dr. Henry Morgentaler's tireless activism. In this post, I discuss some of the key differences in the regulation of abortion in Canada vs the United States.

The Canadian situation
As you may recall, after R v Morgentaler (1988), there were attempts to re-criminalize abortion in Canada that failed. Both attempts were made shortly after the Morgentaler decision where the Supreme Court of Canada (SCC) struck down the criminal prohibition against abortions. At the time, the Criminal Code of Canada made it an offence punishable by life in prison to procure an abortion without first getting approval from a Therapeutic Abortion Committee (TAC). The majority of the SCC did not say that there could be no law on abortion, only that the current legislative regime did not pass constitutional muster in that it violated women's Charter right to security of the person and could not be justified by the government.

The first attempt to pass legislation in Canada was unsuccessful because the bill did not pass in the House of Commons. The second attempt was in 1991: Bill C-43, An Act Respecting Abortion. Recently declassified cabinet documents show that cabinet ministers of the time were privately considering prison sentences as long as 10 years for physicians who provided abortions in contravention of the law and even considered criminal penalties for women who self-aborted. Those features were dropped from the Bill that was eventually passed in the House of Commons by nine votes. The Bill resulted in a tie in the Senate. Unlike in the House of Commons, the Speaker of the Senate cannot break a tie vote and so Bill C-43 did not become law.

Women in Power
To Prime Minister Brian Mulroney's credit, he suggested that the views of the only female cabinet minister (who was arguing strongly for fewer restrictions on access to abortion) should be given more weight:

Health Minister Jake Epp, a devout Mennonite Christian from Steinbach, Man., persistently pleaded that an infant’s life starts at the moment of conception. Barbara McDougall, of Toronto, was the minister for the status of women and she urged more free choice for women.

Epp’s lengthy speeches predominate in the minutes, but at one point, Mulroney pointed out McDougall was the only woman sitting on cabinet’s powerful 20-member priorities and planning committee. Mulroney noted the imbalance did not represent the general population, and he warned committee members McDougall’s views on abortion “were therefore not to be taken lightly.”

The desirability of having women in positions of power and influence, particularly in the area of reproductive rights, should be obvious considering the different perspective women bring to the table, however, one need only look at recent changes and differences in Canadian and US politics to see it's not universally accepted: 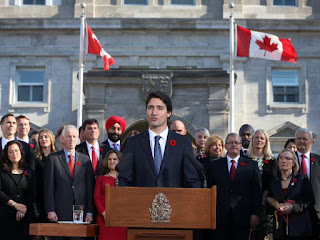 From the Montreal Gazette

This is outrageous: Not a single woman in the room as @Mike_Pence and @HouseGOP propose removing maternity coverage in #Trumpcare. pic.twitter.com/wwY6WsN206
— Jim McGovern (@RepMcGovern) March 23, 2017

Why did Bill C-43 not become law? Perhaps because consensus on a new law could not be reached. But a significant and tragic event occurred several days after the House of Commons passed the bill and before the Senate voted on it: 20-year-old Yvonne Jurewicz from Toronto died from a self-induced, coat-hanger abortion. It was widely publicized and likely weighed heavily on the Senators.

There remains no criminal prohibition in Canada against abortion. While there were other attempts by provincial governments to restrict the practice of abortion, they were found to be ultra vires (outside of the powers / jurisdiction) of the provinces. In general, all provincial and territorial governments cover the fees associated with abortions, though this has not always been the case.

The US Situation
The famous Roe v Wade US Supreme Court decision in 1973 provided women the right to a safe abortion. In that decision, a woman attempted to obtain an abortion in a Texas clinic.

In the US, under common law, abortion was legal until the fetus moved, however, by the 1950s it was completely illegal in most states. At the time, Texas law prohibited abortion except to save the mother's life or in cases of rape or incest. The woman (Norma is her real name, but she was called Jane Roe for the case) lied to the clinic staff, but the clinic wouldn't perform the abortion without a police report. She went to an illegal clinic but it had been shut down by police. She brought suit. She signed an affidavit and never went to the hearings. The defendant in the case was Dallas County District Attorney Henry Wade (who represented Texas), hence Roe v Wade.

It is worth noting that in the US, they needed a person to be a plaintiff who was in that situation at that exact time for test case litigation, as opposed to public interest litigation in Canada where a plaintiff whose interests are directly affected is not always required.

Ultimately, Roe had the baby (who was about 12 at the time of the US Supreme Court decision). She eventually became a pro-life advocate.


A woman's right to choose was framed with respect to a woman's right to privacy, which was rooted in personal autonomy. Part of the difficulty in following the legal reasoning here is that unlike Canada, which set out constitutionally guaranteed rights in the Charter of Rights and Freedoms in 1982, the United States's constitution is considerably older and requires significant interpretation of the language. Thus there are "originalists" such as the late Justice Scalia who, despite acknowledging abortion rights are of great importance to women, assert that they are not protected by the constitution because the constitution does not mention it.

First-trimester abortions
For a long time abortions were not safe procedures, but by the time of Roe v Wade, the majority found that a first-trimester abortion was safer than carrying to term. As safety was no longer a concern, the majority (7-2) found that laws restricting abortion without regard for the stage of pregnancy violate the Due Process Clause of the 14th Amendment. Though it is not present in the US line of cases, there is a strong sense that a woman had the right to terminate their pregnancy for a variety of practical reasons, such as the stigma of unwed motherhood, women getting kicked out of their families, the woman's psychological health, etc.

The majority found that the state has legitimate interests in protecting maternal health and the potentiality of life, but that in the first trimester these interests do not override the woman's right to terminate her pregnancy. These two interests grow more "compelling" the further along the pregnancy is. For the protection of maternal health, the compelling point was found to be the end of the first trimester. Regarding the state's interest in protecting the potentiality of human life, the compelling point was found to be viability. These two points in the pregnancy, at the end of the first trimester and at the age of viability (generally considered 24 weeks), are therefore critical to understanding Roe v Wade, as discussed below.

Note that the court expressly declined to determine when life begins, saying that, "When those trained in the respective disciplines of medicine, philosophy, and theology are unable to arrive at any consensus, the judiciary, at this point in the development of man's knowledge, is not in a position to speculate as to the answer".

In short, in the first trimester the physician is free to determine, in consultation with the patient, whether to terminate the pregnancy. (Note that the language saying that it is the "woman's attending physician" who decides rather than the woman, likely reflects the strong paternalism that existed in medicine in 1973. This wording was changed in the 1992 decision of Planned Parenthood v Casey.)

Abortions after the first-trimester
After the first trimester, the state may regulate abortion to the point where it reasonably relates to the protection of the maternal health. After the point of viability, the majority found that the state could restrict abortion to cases where it would save the mother's life or health.

In 2013 alone, there were 70 new restrictions placed on abortion in 22 states. Many of these laws are passed by the state legislature in the full knowledge that they cannot pass constitutional muster. However, the laws garner significant public attention and allow politicians to become re-elected before the laws are struck down.

Examples of the restrictions include:

Reconciling access to abortion in the US and Canada
The US Supreme Court's decision in Roe v Wade came down 15 years before R v Morgentaler was decided (and the first R v Morgentaler decision of the SCC upheld the law before the Charter was enacted). Since then, the US has taken a significantly different path than Canada regarding regulating abortion.

Interestingly, while a medication abortion has been available in the United States for 17 years, the same medication has only recently been approved for use in Canada, despite its widespread use in other countries. Even then, the restrictions placed on how the medication is prescribed and dispensed in Canada leave many wondering if its intended use rather than its risks are driving the delivery of healthcare.

Finally, where clinicians in Canada will not perform an abortion, women are sometimes sent to the United States to obtain an abortion, which is usually covered by provincial healthcare plans.
Labels: abortion Canada medication Morgentaler Planned Parenthood Roe v Wade United States women